On a rainy Saturday morning, we left our apartment to board a bus to Ronda (pronounced Rohn-da), home to an iconic bridge connecting the two halves of the town and a bull ring. We arrived at noon. Our check in time for the Airbnb was at four. We had some time on our hands.

We started by heading to a cafe. It felt good to me and Evelyn to be off the windy mountain roads. While our stomachs recovered, we shared some tea. We played Uno. We ordered food. We basically hung out until the kids became restless and obnoxious, and then we split up. Justin took the kids and our suitcase across the bridge while I went grocery shopping. It was still raining.

We reunited at the chilly apartment (no heat). As they dug dry clothes out of the suitcase, I reached for my slippers. Oh no! They had gotten wet through the suitcase. My feet were icicles until later in the evening when we watched a movie together under heavy blankets. I wiggled my feet under Evelyn, and she complained she could feel the chill through her clothes.

The next morning was sunny and quite a bit warmer (outside. Inside was still an icebox.) Justin set out to hike down below the bridge, and the girls and I went wandering. The truth is, we went in search of coffee. Our apartment came with none. (And not even dish soap! We had to buy it.) We enjoyed walking the streets and stumbling upon plazas and fountains. Our goal was to find a place outside and in the sun to enjoy our drinks. We succeeded in the end with me ordering my standard cortado doble (double espresso with a bit of steamed milk). 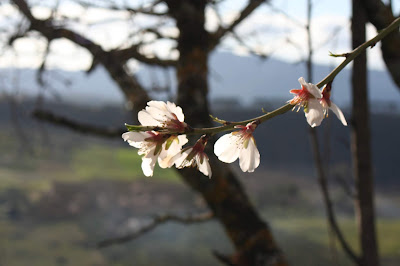 We rushed back to meet Justin at the apartment and prepare to go on a tour of a bull farm. After a short taxi ride, we arrived to meet our guide at Reservatauro. It was a fantastic tour. The girls were in heaven seeing the horses and feeding them nuts that looked similar to acorns. We saw the training areas, we toured the farm to see the bulls and the cows, and we observed how tranquil and peaceful everything was. We learned that bulls are not aggressive when they are with their families. It is only when they are alone that they feel scared and attack. A breakthrough for me was being able to understand our Spanish speaking guide well enough to have the mental space to form questions. I asked so many questions, and our patient guide answered them all. 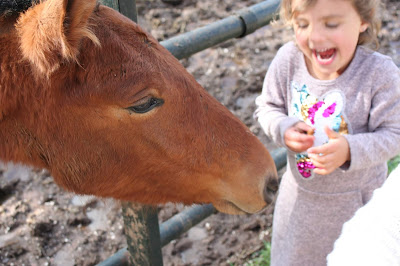 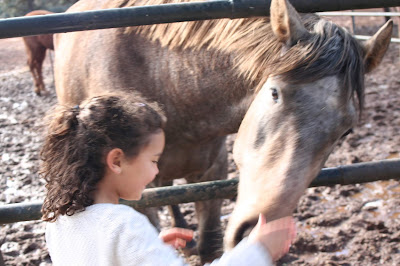 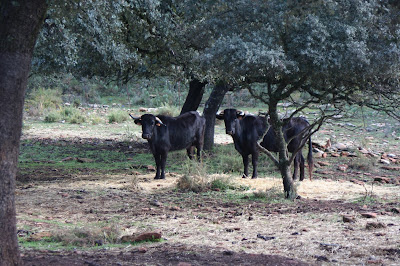 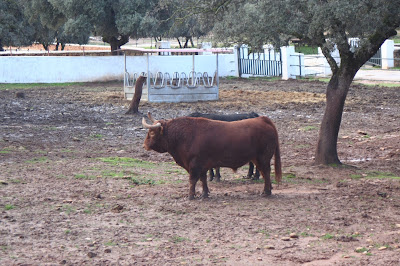 Toward the end of our tour, we met some more Andalusian horses up close. They were absolutely stunning. The dark brown color and black shiny manes reminded me of a stereotypical Spaniard. I was struck by just how similar their features were to the people who trained them.

Evelyn and Lydia had fun with a torero’s cape and a set of bull horns in a training ring. While they were horsing around, in walked Rafael Tejada, the real live torero who owns the place. He graciously shook our hands and said hello to the girls. He showed Evelyn how to hold the cape just so. Evelyn gave it a try, then looked up at him in wonderment. “Have you been in a bullring with a bull before?” she asked in an awed voice. He looked down at her and said quietly, seriously, “Yes, I have.” Later we walked into a museum-like room with life sized portraits of Rafael in the ring, wearing his sparkling pale blue torero costume. 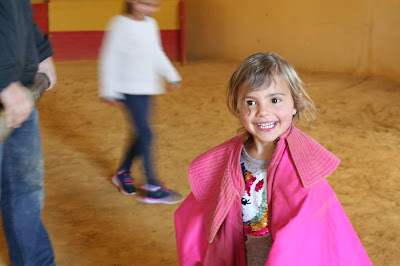 Honestly I have mixed feelings about bullfighting. It is part of Spanish history and is deeply ingrained in their culture. However, I don’t like the idea of turning the bull into a sport. I can’t accept bullfighting wholeheartedly, but I also don’t feel as though I can walk into a culture that is not my own and openly disagree with it. Many Spaniards have started protesting the centuries old tradition. 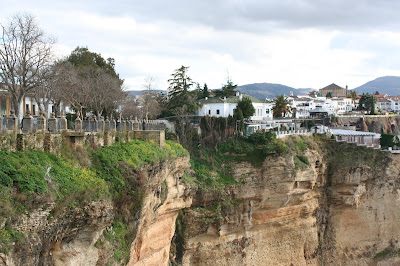 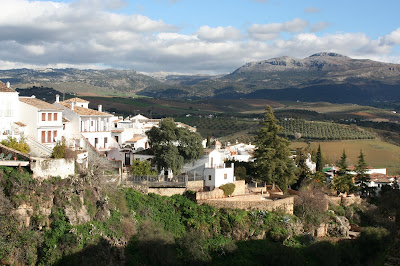 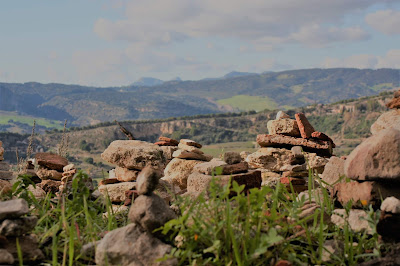 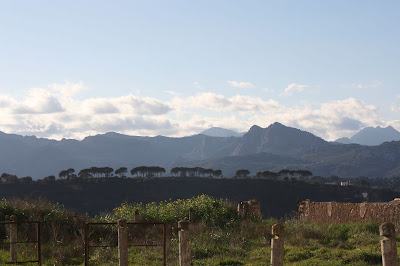 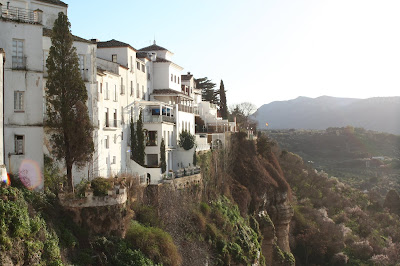 Eventually I wandered into a shop and saw a brightly colored hand-woven rug. It held colors of orange and red with every other color woven in such a way that it all worked. I loved it and knew I would regret not getting it. But I left and hiked some more and gave myself some space to think about it. After I hiked back up, I was still thinking about it, so I used some birthday money to buy it. “Es tan bonita,” I breathed as I bought it.

The following day we visited the bull ring in Ronda. It was fun to go out in the ring after having visited the farm the previous day. We really enjoyed our time looking at the different torero outfits and climbing over the old wooden seats. 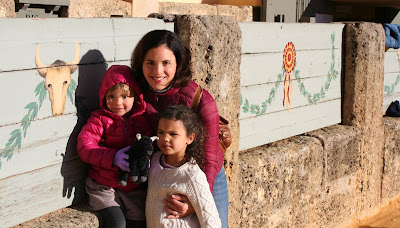 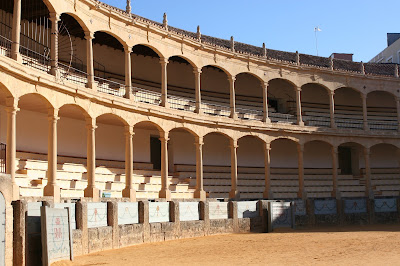 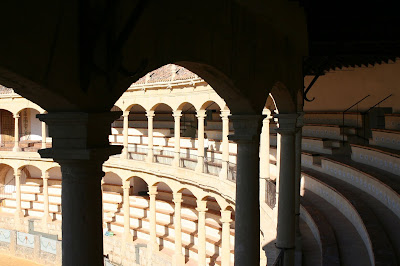 We found a sunny playground and ate lunch outside. There was a fountain with a little house for ducks and pigeons. The light was shining on a white building, and bright green bushes grew along the side. It was a beautiful moment of light, green, the sound of water, and tranquility. We loved Ronda. 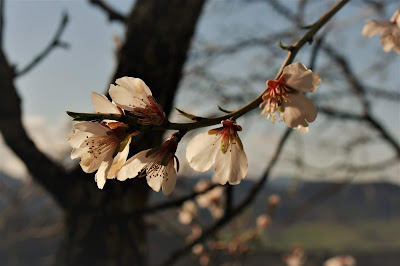