We headed north to a national park called Peneda-Gerês.  A windy mountain road led to the house we stayed in, which was a renovated basement with the owners living above. A steep driveway led to the entrance. The owner advised us not to leave the car parked at the bottom of the drive, as morning frost would make it difficult to get out in the morning. After unloading our suitcases and touring the house, Justin revved the little standard transmission car up the driveway.

The house was simply beautiful. Antiques were everywhere. The front door led to a living room with a kitchen to the right. Down the hall were two bedrooms, each with a bathroom. Everywhere we looked there were intricate wood carvings, old farm tools hung on the walls, big cider jugs, and a china closet full of old dishes. It was enchanting. But COLD. It’s a pity we weren’t there in warmer weather. I would have loved to sit on the little terrace and spend more time outside around the house. But we made do, kind of, with three space heaters and lots of blankets inside. We drank tea, and sometimes I boiled water just to try and heat things up a bit more.
The next day we set out to what we thought was the visitor’s center in the national park. From there we would form a plan to find some waterfalls. However, the guidebook had the coordinates wrong, and after driving more than an hour, we ended up in someone’s private driveway. Now what? We hadn’t had internet to make plans for the day, and we had no phone signal. So we turned around, stopped at a little picnic area, and had lunch.
There was a little stream with a big sandy island in the middle. Evelyn was determined to get to the island, but it was too far to jump. Justin got his feet wet trying. Evelyn wanted to take off her socks and shoes to walk across, but I discouraged her. Eventually she urged Justin to get some stones to build a bridge. As Justin hauled stones, Lydia and Evelyn squabbled over long sticks to “fish” with. Eventually the stones were in place, and Justin tested them out. They sank. Evelyn cried.
In the end, we all ended up taking off our socks and shoes (accept Justin – his shoes were already wet). We traveled across to the island and looked for little bits of pottery. We made our own fun.
Afterward we piled into the car and headed off, knowing the chance of seeing waterfalls was out, but wanting more adventure before heading home. We pulled over to a little parking area and headed down a steep hill. Eventually we came to a stream, where Evelyn gleefully walked across a fallen tree. Lydia and I choose a safer route to cross the stream: I tossed her to Justin, who was on the other side, and then I jumped across.
We headed back when it started getting close to dinner time. Driving so much in one day (three hours!) was hard for me. I had wanted more of a plan. But in the end, it was good to see nature and choose to be cheerful. I had gotten tired of seeing tourist shops in cities. Real life was nice to see.
The next day (after Justin found a café the previous evening to use their internet and make a plan) we drove to two waterfalls. At the first, we had lunch and then scrambled down the bank to get closer to the water. We hiked along the shore to get to the bottom of the waterfall. I grumbled at first (it wasn’t easy for Lydia) but it was worth it in the end. Later we drove to a waterfall where we could hike along the rocks nearby. Justin and I traded off keeping an eagle eye (and a firm grip) on Lydia. I didn’t enjoy this one as much, because I kept having horrible visions of one of the girls tumbling down. I was relieved to leave. As we were driving down the mountain from there, we were delayed by a herd of goats. The shepherd and his dogs were with them. Goat after goat wandered past our car. It was fun seeing them. 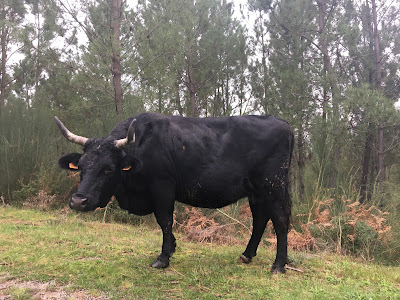 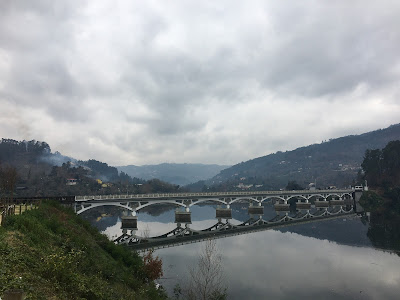 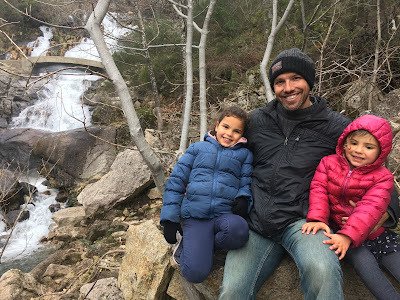 Speaking of driving, it was all twisty mountain roads and stunning vistas. Justin tooted his horn on the windy roads to warn any oncoming cars that we were coming around the corner. He later said it was a relief to be on straight roads. But the views were incredible. Portugal is truly a beautiful country.
We drove toward our next place to stay and stopped at a café to get some Portuguese pastries one last time. The girls played at a little corner area for kids, and Justin and I took advantage of the internet to check sports (him) and read blogs/articles (me). We arrived to our last place to stay, which was chosen purely out of convenience of location and price. It was close to the airport, and we would fly back to Málaga the next day. Let me tell you, if I thought the first place in the mountains had been cold, I was wrong. This place was an icebox. One wimpy heater tried to heat up a four room house. At that point, I was done traveling and couldn’t wait to get home. Justin gave the girls baths, and it was so cold that as they sat down to dinner afterward, I could see steam coming off Evelyn’s warm, wet head. As Justin put the girls to bed, I turned on the stove burner and oven while I cleaned the kitchen just to try and warm up a little.
Coming back to Fuengirola truly felt like coming home. Portugal had been our first big trip since moving into our apartment here, and it was good to be back.