Today I have for you a recipe for a dairy free morning latte. It’s full of healthy fats and takes the place of breakfast.

As I mentioned in my previous post, we have stayed at four different apartments over the course of four weeks. It really wasn’t as bad as you might think. But it wasn’t easy, either.
For starters, we had to lug all of our stuff to each one. We underestimated how difficult this would be. Six pieces of luggage, four backpacks, and two little kids is no picnic. But we managed.
Also, three of the apartments had only one bedroom and a futon to sleep on. We gave the girls the bedroom in hopes they would sleep in later, but Justin and I got sick of making our bed every evening and putting it away in the morning.
But the kitchens. The first thing I did when coming to a new place was open every drawer and cabinet and take stock. What sorts of meals would I be able to make? What utensils and gadgets were provided? Were there any spices or oils to work with, or did I have to buy them (or go without)? I quickly became an expert on making the most of any space.
Our first kitchen was spacious and had a nice flow. There was a door that led to a terrace, and a door I could shut to keep kids out. It was well stocked, and I enjoyed using the pressure cooker to make beans. I learned how to scale and clean fish in this kitchen, and I made fish stock for the first time.
The second kitchen was alright. It was all in the same room as table, futon, etc. There was no door to keep people out, and the sink was small. But it had an oven and a cook top. And the flow was not terrible. Making my coffee latte in the morning was a quick burst of loudness with the immersion blender, and if Justin wasn’t awake yet, well, he was now.
The third kitchen was not too bad. There was a door, and it had all the basic amenities. But the microwave took up a lot of counter space, and there was a beer refrigerator on the counter that also took up too much space. At least there was a stove and oven. No memorable meals came out of this kitchen. Probably because I was thinking so much about the apartment we were hoping to get, and then waiting for our wire transfer to drop so we could move in.
The fourth kitchen. Oh my. It was a closet. There was no oven. The cook top was installed backwards, so you had to read numbers upside down and make sure you were turning on the correct burner. It made me think of looking at a map upside down where you’re supposed to turn right but you think you turn left. Thankfully I didn’t have to do a ton of cooking here, since my in laws were staying in the same city and we could use their kitchen sometimes. Or eat out. But, I did cook Evelyn’s birthday dinner of potatoes, eggs, and salad (all her request) in this tiny kitchen.
All in all, I’m thankful with the kitchen I ended up in. Not too big, not too small. Just right.

If you are interested in reading more about our experience in each apartment and the surrounding areas, head on over to my husband’s blog post on finding an apartment in Spain.

Below is my recipe for a coffee latte, inspired by Bulletproof Coffee. When I drink this latte, I drink it as my breakfast, and I don’t eat my first meal until a few hours later. 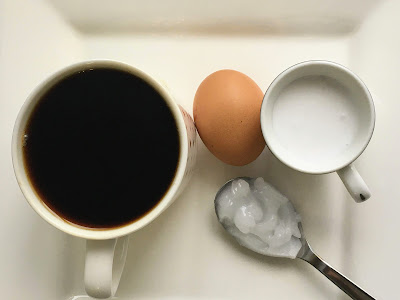 My Coffee Latte
This is inspired by Bulletproof Coffee 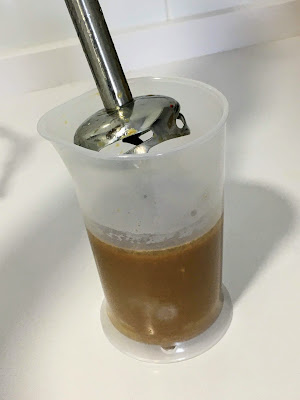 Brew a cup of coffee, however you normally do. I like it on the stronger side when I add things like coconut milk to it. Pour into a container with room at the top for blending.
Add an egg yolk, (you can save the egg white for baking), coconut oil, and coconut milk.
Blend together with an immersion blender. Alternatively, you can blend everything in a regular blender.
Pour into mug and enjoy. 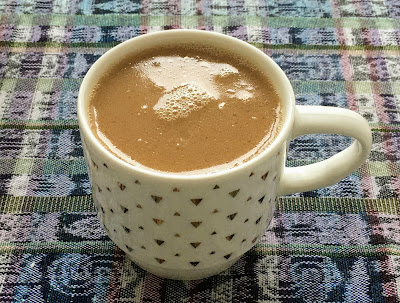