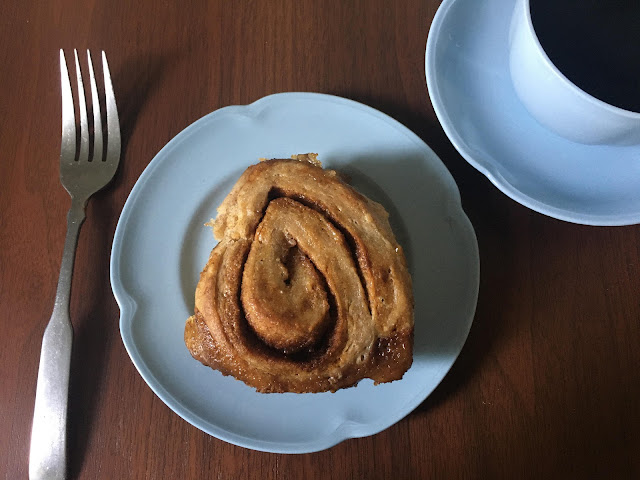 I have taken some time off from special recipes and creativity in the kitchen since we moved. We kept our old house as a rental property and moved to a new house that is still in Baltimore City. The past month has been full of packing, unpacking, painting, organizing, putting together furniture and traveling to Ikea and Ace Hardware. We have been surviving off of easy to put together recipes that I have in my head.
But finally things have slowed down to the point where we are unpacking just a box or two a day, and we only have two rooms left to paint.
A few weeks ago I listened to an excellent sermon on the reality that God values sabbath rest.  After working so hard, this was balm to my soul. So we made it happen, and included special Sunday breakfast to go along with it.
I have been eyeing these cinnamon rolls from Farmhouse on Boone for several months. I first discovered them while still in Spain. I didn’t have a cast iron skillet there, and even though I probably could have made it work in a glass baking dish, the reality was that there were so many good bakeries and ice cream places that we didn’t have room for any extra sweets.
Finally, though, we were settled enough to give them a try. And they didn’t disappoint.
First let me tell you about the blue dishes. Ever since I was a young girl, I remember seeing these dishes in my Aunt Nancy’s house in Pittsburgh. She kept them in a china closet that was built into the wall. The blue dishes were near the bottom with a glass door in front. I would crouch on the floor and admire them, thinking that someday I would get to use those blue dishes.
A few years ago Aunt Nancy moved from Pittsburgh to Virginia to retire with my parents. She asked me, “Do you want the blue dishes?” “Yes!” I responded.
They lived in a box in my basement for a year and a half because I had no where to put them and was afraid of breaking them. Then we went to Spain.
Now we are moved in, and the dishes occupy the top shelf of my cabinet. Eventually we will renovate the kitchen and replace the cabinets with open shelving to display the dishes better. But for now, they come out on Sundays, for our special breakfasts and for our Sabbath dinners. 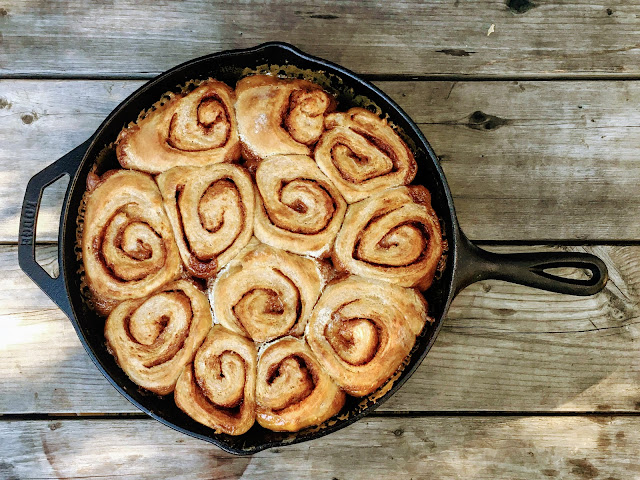 Now for the recipe. You do need a sourdough starter to make these work. If you don’t have one but are interested in starting one, here is a great tutorial.
If you do have a starter (and it seems like half the world does now after quarantining) it is very much worth it to make these cinnamon rolls. There is not much to it. I mixed up the dough the night before I made them. In the morning, I get up before others, so I added the remaining ingredients and let the dough rest. Then I rolled out the dough into a flat rectangle. I spread it with a cinnamon/sugar/butter mixture. I rolled it into a tight log and pinched in the ends. The fun part was using thread (you can also use plain floss) to wrap around and cut off rolls. I placed the rolls in the skillet, let them rise once again and baked them.
I skipped the cream cheese icing she recommends because I didn’t have the ingredients. You know, I didn’t miss it. I very much enjoyed seeing the swirl on top of each roll and appreciating the soft, sweet bread and the sugary cinnamon.
I replaced the honey with maple syrup and the brown sugar with coconut sugar, because that’s what I had. I found that replacing the brown sugar with coconut sugar prevented a sugar headache that I often get after eating regular sugar.
Sourdough Cinnamon Rolls
Adapted from Farmhouse on Boone
Ingredients
Directions 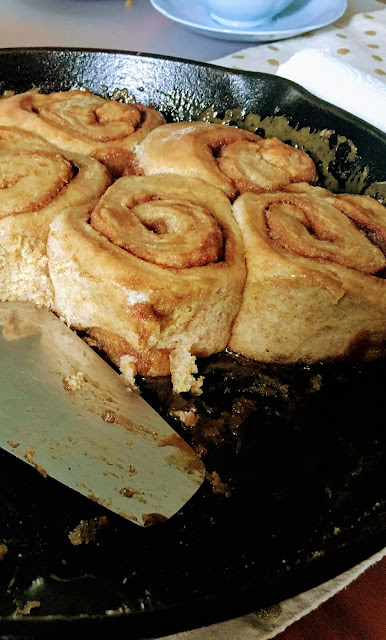 Other brunch-y recipes for you:
I hope your week is off to a great start!