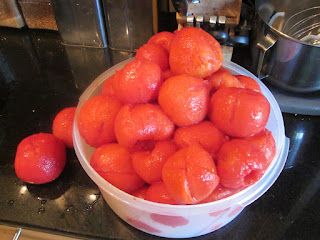 I realize that most of you have probably turned your thoughts to cooler weather produce, like squash, but not so fast! There is still much of summer to be had, depending on where you live. I sit weekly at farmers markets selling my granola and admiring the beautiful tomatoes across the way. I wanted to figure out how to preserve them easily, without going to the trouble of canning.

Whole peeled tomatoes are so convenient to use in many recipes, but I am reluctant to buy them canned because of the BPA linings. Although some companies are now using alternatives to BPA, I read recently that all canned tomato products are still lined with BPA because of the acidity in tomatoes. 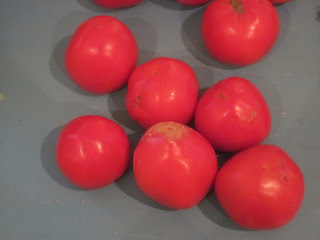 I asked a farmer at the market what price I could get on a lot of tomatoes. “Would you be interested in seconds?” he asked. “Seconds” are tomatoes that are slightly bruised, too big, too small, or otherwise imperfect. They are great for sauces and soups, and by the looks of the ones he gave me, for any other recipe too. Guess how much I paid for 25 pounds of tomatoes? Ten bucks! It was amazing. Three big bags of lovely tomatoes, all for ten dollars.

I reserved about five pounds to use fresh, and processed the rest of the 20 pounds by flash boiling them, plunging them into ice water, and then peeling them. I could have gone on to can them in a hot water bath, but instead I weighed them out into 28 ounce portions (the size of a large can) and froze them in freezer bags. The whole process, including cleaning up and packaging, took just over an hour. Totally worth it. Now I can pull BPA-free tomatoes out of my freezer all winter. Twenty pounds yielded the equivalent of nine 28 oz. cans.

1) Here’s how it works. Set up your station. Fill a large pot with water and bring to a boil. Fill a large bowl with ice and add water, leaving some room at the top. Set up a towel on the counter that you don’t mind getting tomato on. Have a slotted spoon ready, or you can use a pasta insert.

2) Meanwhile, cut out the stem from each tomato and slash an X on the opposite end.

3) Then, working in batches, add a few tomatoes at a time to the boiling water. I placed them in the pasta insert and lowered it in all at once, but you could also use a slotted spoon. Let them simmer for about 30 seconds, then take them out.

4) Place them in the ice water for a few seconds, then slip the skins off. You’ll get a rhythm going where you slip off the skins while other tomatoes are boiling.

5) Let them cool (they will be mostly cool after the ice water) and pack them in freezer bags. I weighed mine in 28 ounce portions, which was roughly 5-6 tomatoes.

6) Stick them in the freezer, and pull them out little by little throughout the winter for wonderful sauces and soups. Yay!