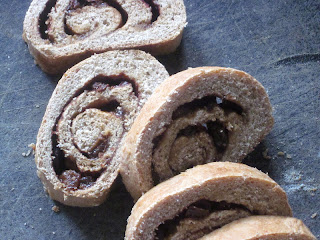 There is a coffee shop in Baltimore that has a lovely, charming, city atmosphere. They have nice things to buy, a bar with stools looking across the street at a beautiful cathedral, and plenty of people to watch. They are within walking distance from the central library, which always makes for a nice pairing of activities, and the staff is generally nice. However. I just don’t love their menu. They have limited breakfast options, so-so pastries, and I can’t say I’ve had too much lunch there. The coffee is good, but never wonderful. But they have the most amazing pain de mie raisin, which is a thick slice of white flour raisin bread grilled in a hearty amount of butter. It is divine.

I wanted to try and recreate it at home with less sugar and half whole grain flour. I’ve come close to succeeding, but it will never replace the dessert-like version with all white flour and tons of butter. This bread recipe is very easy, as far as bread recipes go. Have you ever made bread before? It can be intimidating. I remember the first time I tried, it seemed like an insurmountable goal. But it wasn’t as hard as I thought. It is truly rewarding to pull fresh bread out of the oven and make the house smell amazing.

This basic bread recipe, adapted from Cooking Light, has only four ingredients, and one optional ingredient (cornmeal). To make it cinnamon raisin, I added three additional ingredients. The standard formula for making bread is as follows:

It looks like a huge time commitment (and it is) but keep in mind that the total active time is about 20 minutes. The rest is waiting for the dough to rise and bake. Here is the recipe and step-by-step photos to help you on your way to successful homemade bread.

Cinnamon Raisin Bread
Adapted from Cooking Light
Makes two loaves
I like to do other baking simultaneously. The reason is that the oven is on for a while and churns out a bunch of products, which I can freeze, and the extra heat helps the bread to rise faster. It’s not a requirement, but it prevents hour-plus rise times in a cold kitchen.


Step 1
Mix together 4 1/2 teaspoons yeast (two packets) with 2 cups warm water (as hot as it gets from the tap) in a large bowl. Sprinkle some sugar on top. Within 5 minutes, the yeast should “bloom”. If nothing happens, you have bad yeast. Get some new yeast and try again.

Step 2
Add to the yeast and water 3 cups whole wheat bread flour and 3 cups all-purpose flour (6 cups total). If you don’t have bread flour, don’t worry. Your bread will just have a looser crumb. Add 2 teaspoons salt. Stir together with a wooden spoon as much as you can, then dig in with your hands. Turn dough out onto clean, floured counter. It will look scrappy, like this: 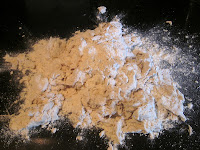 After kneading it for a couple of minutes, form it into a smooth ball with the seam side down. 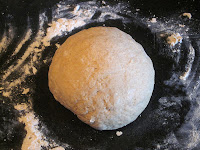 Step 3
Place dough into oiled bowl, turning to coat the dough with oil. Cover with plastic wrap or a damp towel. Place in a warm place free from drafts and let rise until doubled — 45 minutes to an hour. 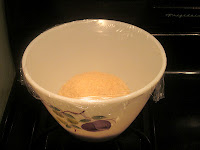 You will know when the dough has risen enough when you can press two fingers into the dough, and the indentation remains. If it springs back, it needs to rise longer. 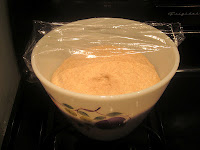 Step 4
Lightly flour a clean countertop. Pour dough onto counter. Divide into two even pieces, and press gently with your palms to deflate each piece of dough. Flatten each piece, starting from the middle and working your way out, to make dough like a pizza. 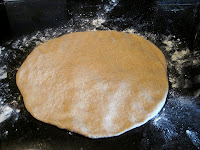 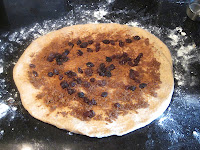 One at a time, roll the longer edge in, tucking under as you go, until you roll the dough into a log. Pinch the edges to keep in the filling, and place on a baking sheet sprinkled with cornmeal. 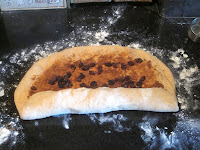 Place both logs, seam-side down, onto a baking sheet, cover with plastic wrap or a towel, and let rise until doubled in size, about 45 minutes. 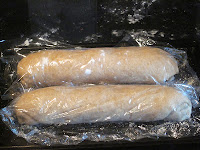 Step 5
Preheat the oven to 450 degrees. Uncover dough and bake for about 20 minutes, until golden brown on top. Let cool completely. If you want to freeze some of this bread, wrap it well and place in zip-lock bag. 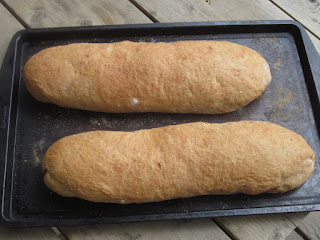 The final product, toasted and buttered. Perfect with a mug of tea. 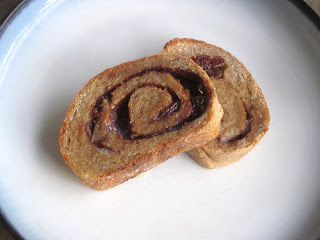